We have learned over the last few days that traveling with a young child has its difficulties but also has some major benefits.  Yesterday we decided to visit the Louvre museum and once we arrived at the courtyard we noticed a line of about several hundred people to purchase entrance tickets.  As I started to approach the line I was stopped by a museum attendant.  I was thinking that she was going to tell me no strollers, but no, much to my surprise she pointed me to the "priority line".  What!! There was absolutely no one in the line.  She said that our entire family could go through it since I HAD a stroller.  We headed over still unsure if we would get in, and low and behold we walked right through to a special "priority elevator".  We were in.  This cut off about and hour and a half of waiting in the hot Parisian sun.  I turned to the kids and told them that they should be extra nice to Eden today since she got them out of the sun and in the museum in under 2 minutes. We spent the day visiting the Louvre and got to see the Mona Lisa, The Winged Victory, Napoleon III apartments, Venus de Milo, the Dying Slave by Michelangelo, and much, much more.  Afterwards, we headed towards Notre Dame Cathedral with a stop for lunch beforehand. 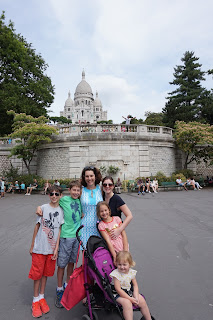 Today we headed towards Montmartre.  Our metro ticktes allowed us to ride the funicular instead of climbing the hundreds of stairs.  Once at the top we went inside the Sacre Couer Basilica.  Towards the end of the visit, Eden said the she "needed to go so bad."  We all know what that means, number 2 and now.  I decided to ask a church attendant where the nearest restroom was.  He explained to me where is was (not very nearby), and then asked me who needed to go.  I pointed to Eden and said "La petite, (the little one)."  He told me to follow him.  We went back into the Basilica and behind a rope with the word "private" written across it.  He lead myself, Eden and Danielle down a long corridor to a private restroom.   He told us to come back this way once done.  We all proceeded to use the facilities, in Europe if you have the chance go, because you never no when the chance will come again.  Once again, Eden saved us a huge amount of time hunting for a restroom.  I felt like Charlie in the chocolate factory with a golden ticket, just my golden ticket is Eden.  Time and again while traveling people have bent over backwards to let her use the restroom, get her something to eat for free at midnight and allowed us to bypass lines.  I have learned that if you have a small child with you shop/restaurant owners will let you use the restroom for free.  Usually you need to purchase something, so I had actually made a restroom budget, but not with our little golden ticket.  Also, everyone ohhs and ahhs over her, much to her delight.  She has learned that if she says bonjour, au revoir, or merci people gush over her even more.  We always knew that she was a charmer, but it has really come out in spades while traveling.

After leaving the Basilica we walked around Montmartre and visited the art district.  Rachel and I bought a few pencil drawings of the city and we all had une glace (ice cream) and crepes as a snack. Now back at the apartment we are all relaxing while our little golden ticket naps.