A bit late in posting this but wanted to talk about some of the things we did to get ready for the trip...

In order for us to get ready to go on this journey, one of the first things we needed to do was to find a way to pay for it.  The first thing was to come up with a budget for what we felt was reasonable to spend in order to make this happen.  We researched the prices of tickets using various websites like kayak.com and skyscanner.com.  We also compared the cost of buying several one way tickets versus round the world tickets through Star Alliance, One World or Air Emirates.We researched the cost of staying in different locations on airbnb.com and homeaway.com. I found both of these websites to be the most helpful and you could find lots of options for every location we were interested in.  So, after several weeks of research and spreadsheet making we came up with a budget that would suit our family needs and to fund this operation, we basically came up with 2 options.  We own 2 homes, one full time house and a vacation rental that we had purchased fairly recently.  Option 1 was  renting out both properties.  Since we already had the mountain condo listed in VRBO, that one would have been easy to continue.  We listed our home on zillow and got some interesting renter prospects.  If we went with the option to keep both houses and rent we would need to dip into our home equity line of credit that we had opened as a "just in case" safety net.  We would be in essence racking up a pretty hefty debt to make this happen.  Option 2 was sell everything and use a portion of the proceeds to fund our adventure.  Now for us there were pros and cons to both options.  If we rented, we had a landing place to come back to when the year was up or the money ran out, but we had a pretty good sized loan to pay off.  If we sold, we had no debt after the year was over, but also sold 2 amazing places that we both love. Another thing that occurred to us during this time was that if we sold we would be able to settle back down virtually anywhere.  This opened the door to a lot more opportunities of what to do in the future and not being constrained to one particular geographical location.  On the other had if we did end up back in good old Fort Collins, would it be ridiculous to sell a house that we both love.  Well, in the end the argument for both could have gone on forever, but we decided to sell both places.  There was something extremely appealing to have absolutely no debt, no bills, nothing that tied us down.  And as for where we end up in a year, only the future will know.  We listed both places and got an offer on the house in about a week and one on the condo in a little less then a month.  I was surprised at how fast things went.  We had fully expected that the places would sell once we had already left.  So we went through virtually everything we own.  Had a huge garage sale, donated tons, and packed up the rest.  Got a storage unit, loaded it up, left some things at Bob's place (Justin's dad) and some at Jon's place (Justin's brother).  We enlisted the help of friends and family and did it all that way, instead of hiring movers,  in order to save money.  Let me tell you movers though expensive are awesome.  I forgot how heavy some of our furniture was.  We decided to go through the house room by room and keep only the things we love, which made the process very straight forward.
During this whole process we needed to get check-ups and vaccines for all of us.  I scheduled dentist, orthodontist and doctor appointments for each of us.  Researched where we wanted to go and what kind of immunization recommendations we needed.  Everyone needed to get some extra immunizations but not much.  We did although need to get quite a few prescriptions filled.  Some for existing medications that we needed a one year supply for and some for malaria.  This was going to be tricky, because most insurance policies don't let you fill more than 30 or 90 day supplies.  But thanks to the great staff at the Super Target in Fort Collins, they helped figure out A) how to get a years worth with insurance paying and B) how to find 3 months of malaria medication for 6 people.  Not an easy task.  They called around to several different pharmacies to piece meal the complete amount of pills we needed.  Needless to say the whole process took several weeks.
In the midst of all of this I decided to throw Justin a surprise 40th birthday party, and have it 2 weeks before we left. Well I have discovered I can keep a secret and also I am pretty good at multi-tasking, although I don't like to.  I had known that Justin had really wanted to see quite a few people before we go and luckily I was able to get a hold of everyone.  To preserve my sanity I had it catered and asked my amazing friend Julie Griffith to make the cake.  She totally outdid herself.  It was beautiful and delicious. 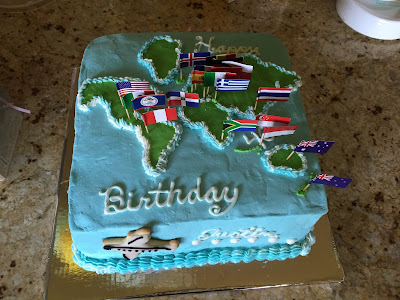 Also, at the last minute everyone stepped up to set things up before Justin got home.  The hardest part in all of this was getting rid of Justin for the day.  Originally Jon was going to help him move things to his place, but Justin did not want to go along with that plan.  So it was time for Caleb and Joel to step up, come up with a plan to get Justin out of the house and execute it.  They did it beautifully.

We closed on the house on June 30th and drove up to our condo in Winter Park for one last stay.  We closed on that via power of attorney with Jon on July 10th.  During one of our last days in Colorado Justin had a major crash on the alpine slide.  I have never seen such bad road rash.  It took over a month to heal and he still has one scab left on his knee that keeps breaking open.  That makes it nearly 6 weeks since his accident.  So Justin's last days in Colorado and first 2 weeks traveling were in a lot of pain and with limited mobility.
It has truly been refreshing for us to not even think about bills.  To be debt free has felt great, it is a very liberating feeling.  It has made me think about what you really need.  Also, we have 4 duffle bags and 5 carry-ons between the 6 of us.  This too, has made us look at what we really need versus want.  The kids packed up their back pack with personal items like toys, ipads, drawing pads, and pencils.  The ipad, now that was a struggle as to bring or not and as time has gone on I wish we had not.  We brought them to use for getting books to read and to face time with friends and family,  but it has become a task to make sure that they not get overused for games.  So far, we have taken them away 3 times and they will not get them back until our schooling starts.  Sometime I think technology is great and sometimes I hate it.  Our rules for the ipad are:  use only in the plane when traveling, can be used during down time for 1 hour a day, and don't argue over it.  Well, each rule has been broken a few times by a few unnamed kids.  So now they will get it back for an even more limited time for school and face time with friends and family.  Ahhhh, first world problems.
Posted by Unknown at 9:18 AM